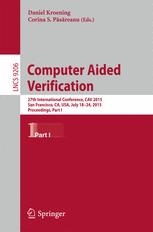 We characterize the complexity of liveness verification for parameterized systems consisting of a leader process and arbitrarily many anonymous and identical contributor processes. Processes communicate through a shared, bounded-value register. While each operation on the register is atomic, there is no synchronization primitive to execute a sequence of operations atomically.

For finite-state machines, our proofs characterize infinite behaviors using existential abstraction and semilinear constraints. For pushdown machines, we show how contributor computations of high stack height can be simulated by computations of many contributors, each with low stack height. Together, our results characterize the complexity of verification for parameterized systems under the assumptions of anonymity and asynchrony.

We study the verification problem for parameterized asynchronous shared-memory systems [9, 12]. These systems consist of a leader process and arbitrarily many identical contributors, processes with no identity, running at arbitrary relative speeds. The shared-memory consists of a read/write register that all processes can access to perform either a read operation or a write operation. The register is bounded: the set of values that can be stored is finite. Read/write operations execute atomically but sequences of operations do not: no process can conduct an atomic sequence of reads and writes while excluding all other processes. In a previous paper [9], we have studied the complexity of safety verification, which asks to check if a safety property holds no matter how many contributors are present. In a nutshell, we showed that the problem is coNP-complete when both leader and contributors are finite-state automata and PSPACE-complete when they are pushdown automata.

In this paper we complete the study of this model by addressing the verification of liveness properties specified as \(\omega \)-regular languages (which in particular encompasses LTL model-checking). Given a property like “every request is eventually granted” and a system with a fixed number of processes, one is often able to guess an upper bound on the maximal number of steps until the request is granted, and replace the property by the safety property “every request is granted after at most \(K\) steps.” In parameterized systems this bound can depend on the (unbounded) number of processes, and so reducing liveness to safety, or to finitary reasoning, is not obvious. Indeed, for many parameterized models, liveness verification is undecidable even if safety is decidable [8, 13].

Our results show that there is no large complexity gap between liveness and safety verification: liveness verification (existence of an infinite computation violating a property) is NP-complete in the finite-state case, and PSPACE-hard and in NEXPTIME in the pushdown case. In contrast, remember that liveness checking is already PSPACE-complete for a finite number of finite-state machines, and undecidable for a fixed number of pushdown systems. Thus, not only is liveness verification decidable in the parameterized setting but the complexity of the parameterized problem is lower than in the non-parameterized case, where all processes are part of the input. We interpret this as follows: in asynchronous shared-memory systems, the existence of arbitrarily many processes leads to a “noisy” environment, in which contributors may hinder progress by replying to past messages from the leader, long after the computation has moved forward to a new phase. It is known that imperfect communication can reduce the power of computation and the complexity of verification problems: the best known example are lossy channel systems, for which many verification problems are decidable, while they are undecidable for perfect channels (see e.g. [1, 3]). Our results reveal another instance of the same phenomenon.

Technically, our proof methods are very different from those used for safety verification. Our previous results [9] relied on a fundamental Simulation Lemma, inspired by Hague’s work [12], stating that the finite behaviors of an arbitrary number of contributors can be simulated by a finite number of simulators, one for each possible value of the register. Unfortunately, the Simulation Lemma does not extend to infinite behaviors, and so we have to develop new ideas. In the case in which both leader and contributors are finite-state machines, the NP-completeness result is obtained by means of a combination of an abstraction that overapproximates the set of possible infinite behaviors, and a semilinear constraint that allows us to regain precision. The case in which both leader and contributors are pushdown machines is very involved. In a nutshell, we show that pushdown runs in which a parameter called the effective stack height grows too much can be “distributed” into a number of runs with smaller effective stack height. We then prove that the behaviors of a pushdown machine with a bounded effective stack height can be simulated by an exponentially larger finite-state machine.

Related Work. Parameterized verification has been studied extensively, both theoretically and practically. While very simple variants of the problem are already undecidable [6], many non-trivial parameterized models retain decidability. There is no clear “rule of thumb” that allows one to predict what model checking problems are decidable, nor their complexities, other than “liveness is generally harder than safety.” For example, coverability for Petri nets—in which finite-state, identityless processes communicate via rendezvous or global shared state— is EXPSPACE-complete, higher than the PSPACE-completeness of the non-parameterized version, and verification of liveness properties can be equivalent to Petri net reachability, for which we only know non-primitive recursive upper bounds, or even undecidable. Safety verification for extensions to Petri nets with reset or transfer, or broadcast protocols, where arbitrarily many finite-state processes communicate through broadcast messages, are non-primitive recursive; liveness verification is undecidable in all cases [2, 8, 13]. Thus, our results, which show simultaneously lower complexity than non-parameterized problems, as well as similar complexity for liveness and safety, are quite unexpected.

German and Sistla [10] and Aminof et al. [4] have studied a parameterized model with rendezvous as communication primitive, where processes are finite-state machines. Model checking the fully symmetrical case—only contributors, no leaders—runs in polynomial time (other topologies have also been considered [4]), while the asymmetric case with a leader is EXPSPACE-complete. In this paper we study the same problems, but for a shared memory communication primitive.

Population protocols [5] are another well-studied model of identityless asynchronous finite-state systems communicating via rendezvous. The semantics of population protocols is given over fair runs, in which every potential interaction that is infinitely often enabled is infinitely often taken. With this semantics, population protocols compute exactly the semilinear predicates [5]. In this paper we do not study what our model can compute (in particular, we are agnostic with respect to which fairness assumptions are reasonable), but what we can compute or decide about the model.

A non-atomic network is an infinite family of systems parameterized by a number \(k\). The \(k\)th element of the family has \(k+1\) components communicating through a global store by means of read and write actions. The store is modeled as an atomic register whose set of possible values is finite. One of the \(k+1\) components is the leader, while the other \(k\) are the contributors. All contributors have exactly the same possible behaviors (they are copies of the same \(\omega \)-language), while the leader may behave differently. The network is called non-atomic because components cannot atomically execute sequences of actions, only one single read or write.

Next we introduce a notion of compatibility between a word of the leader and a multiset of words of the contributor (a multiset because several contributors may execute the same sequence of actions). Intuitively, compatibility means that all the words can be interleaved into a legal infinite sequence of reads and writes supported by an atomic register—that is, an infinite sequence belonging to \(\mathcal{S}\). Formally:

An easy consequence of the stuttering property is the copycat lemma [9].

2.3 The Model-Checking Problem for Linear-Time Properties

We consider the model checking problem for linear-time properties, that asks, given a network \(\mathcal{N}\) and an \(\omega \)-regular language \(L\), decide whether \(\mathcal{N}\parallel L\) is non-empty. We assume \(L\) is given as a Büchi automaton \(A\) over \({\varSigma }_{\mathcal{D}}\). Intuitively, \(A\) is a tester that observes the actions of the leader; we call this the leader model checking problem.

We study the complexity of leader model checking for networks in which the read-write \(\omega \)-languages \(\mathcal{D}\) and \(\mathcal{C}\) of leader and contributor are generated by an abstract machine, like a finite-state machine (FSM) or a pushdown machine (PDM). (We give formal definitions later.) More precisely, given two classes of machines D, C, we study the model checking problem \(\mathtt MC (\mathtt D ,\mathtt C )\) defined as follows:

There are two natural variants of the model checking problem, where \({\varSigma }_A = {\varSigma }_{\mathcal{C}}\), i.e., the alphabet of \(A\) contains the actions of all contributors, or \({\varSigma }_A = {\varSigma }_{\mathcal{D}} \cup {\varSigma }_{\mathcal{C}}\). In both these variants, the automaton A can be used to simulate atomic networks. Indeed, if the language of A consists of all sequences of the form \((w_d() r_c() w_c() r_d() )^\omega \), and we design the contributors so that they alternate reads and writes, then the accepting executions are those in which the contributors read a value from the store and write a new value in an atomic step. So the complexity of the model-checking problem coincides with the complexity for atomic networks (undecidable for PDMs and EXPSPACE-complete for FSMs), and we do not study it further.

NP-hardness follows from the NP-hardness of reachability [9]. We show membership in NP with the following high-level nondeterministic algorithm whose correctness relies on Lemmas 2 and 3:
We show that the algorithm runs in polynomial time. First, because the sequence guessed is no longer than \(\vert {Q_C}\vert \), the guess can be done in polynomial time. Next, we give a polynomial algorithm for step (5):

A Büchi PDM is a PDM with a set \(F\subseteq Q\) of accepting states. A word is accepted by a Büchi PDM if there is a run on the word for which some state in \(F\) occurs infinitely often along the PDM-configurations. The following lemma characterizes accepting runs.

5.1 A FSM for Runs of Bounded Effective Stack Height

Consider a run of a PDM that repeatedly pushes symbol on the stack. The stack height of the configurations2 is unbounded, but, intuitively, the PDM only uses the topmost stack symbol during the run. To account for this we define the notion of effective stack height.

Every infinite run of a PDM contains infinitely many positions at which the effective stack height is 1.

In a \(k\)-bounded run, whenever the stack height exceeds \(k\), the \(k+1\)-th stack symbol will never become the top symbol again, and so it becomes useless. So, we can construct a finite-state machine \(P_k\) recognizing the words of \(L(P)\) accepted by \(k\)-bounded runs.

We fix a Büchi PDM \(D\) and a PDM \(C\). By Theorem 3, in order to reduce MC(PDM,PDM) to MC(PDM,FSM) it suffices to prove the following Reduction Theorem:

Theorems 4 and 2 provide an upper bound for MC(PDM,PDM). PSPACE-hardness of the reachability problem [9] gives a lower bound.

The Boundedness Lemma. We are interested in distributing a multiset of runs of \(C\) into another multiset with, loosely speaking, “better” effective stack height.

Condition (4) means that, after removing the dark suffixes, \(R_Z(i_\rho )\) and \(R_Z(k_\rho )\) contain the same pruned configurations, although possibly a different number of times (same set, different multisets). If we obtain the same multiset, then the fragment of \(\pi \) between positions \(i\) and \(k\) is pumpable by (1) and (2), and we are done. Otherwise, we use (3) and the fact that \(R_Z\) is synchronized (which had not been used so far) to obtain a new distribution in which the multisets coincide. This is achieved by adding new runs to \(R_Z\).

A finite-state automaton (FSA) is an FSM which decides languages of finite words. Therefore an FSA is an FSM with a set \(F\) of accepting states.

We use cookies to improve your experience with our site. More information